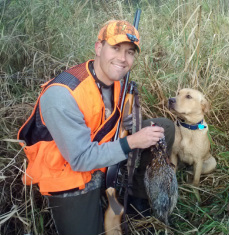 Ryan Propson (Second Vice President/Membership Coordinator)
I grew up near Kaukauna, WI and have been active in outdoor activities since I could walk.  I graduated from UW Stevens Point in May 2010 and was hired in June 2010 as a Wisconsin Conservation Warden.  My first station was Appleton and I've chosen to stay there since.  In my free time I enjoy spending time with my family and playing with my dog.  I also enjoy bow hunting, turkey hunting, pheasant hunting, landscaping, and doing anything else I can to keep from sitting in front of the tv. I became involved with WCWA in 2012 as a regional representative and took over the Membership Coordinator position in 2013.  As the coordinator, I update and maintain membership records, send out renewal notices, and organize the mailing lists for our WI Game Warden magazine.  I'm involved in many other aspects of the Association and continually strive to keep the Association relevant to the Game Warden profession and anyone else who wishes to support the Associations's goals. 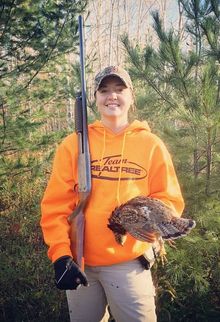 Lynna Martin (Secretary)
I am originally from and am a member of the Red Cliff Reservation in northern Wisconsin.  After graduation from Bayfield High School I studied environmental conservation at Northern Michigan University and obtained a job as a tribal game warden on a reservation.  I was hired by the State of Wisconsin in 2012 as an LTE Deputy Warden and received full-time employment in 2013 where I cover northern Bayfield County.  In my free-time I enjoy spending time in the outdoors hunting grouse and deer, trapping, snowshoeing, hiking and fishing.

I became the Northern Representative of WCWA in 2015 and also joined the Publications Committee shortly thereafter.  In 2018 I took over as Secretary of WCWA and look forward to being a positive representation of the Association.

Jack Daniel (Treasurer)
I proudly served as a warden from 1974-2001 when I retired from full-time credentialed work. I was first stationed in Western Dane County. In 1983, I took the position as a special investigator dealing with wildlife crime (and a special interest in law enforcement computing.) In 1986 I became an Administrative Warden with the Bureau of Law Enforcement. In 1997, I became the Deputy Chief Warden and served in that position until my retirement. Since retirement I assumed a part time non-credentialed position working for the Bureau completing a variety of administrative tasks.
I’ve been involved with WCWA since its inception in 1989. I was its first Treasurer and helped to achieve its nonprofit status with the IRS. In 1994, I stepped down from the role only to resume it again in 2001.
I enjoy fly fishing for trout, fly tying and rod building, traveling, gardening, and anything to do with food and cooking. I also enjoy spending time with my children and grandchildren and have been happily married to my wife Claudia for 29 years. 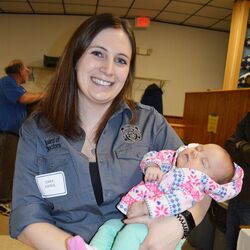 Cara Kamke (Bureau Representative)
An environmentally focused charter school is where I began my love for the outdoors. I went to Northland College where I received by bachelors degree in Biology with an emphasis in environmental education. I started working for the DNR just after graduation in 2011 as a wildlife intern/technician doing research on sharp-tailed grouse at Crex Meadows. I became a Conservation Warden in 2012 and have was stationed in Green Bay, WI until 2017 when I took a transfer to Appleton, WI. In my free time I enjoy spending time with my family outside; hiking, camping and biking.  In 2013 I joined the WCWA and became a regional representative. In 2016 I took the position as Vice President and in 2018 I took over the position as President. In 2020, I took a promotion into the DNR's Law Enforcement Management Team and took the position as Bureau Director.